Kanazawa and the Blatant Disregard for Zoning Laws

Back on track, today we had a full on day of walking ahead of us as we traversed the every so slightly damp streets of Kanazawa (luckily our hostel provided umbrellas).

First on the agenda was Myoryu-Ji Temple. A plain jane Buddhist temple on the outside, Myoryu-Ji was actually a heavily fortified military outpost which was disguised in order to fool the shogunate of the era who were oddly reluctant to allow their subjects to construct large military fortresses unchecked. After stumbling through the a chaotic ticket reservation process (an attendant at the temple could not sell us tickets but instead gave us a phone number to call and a tiny map directing us to the nearest pay phone, so we could call the temple and make a reservation) we were guided through every inch of the temple and its many secret passageways, trap doors and clever defenses. Also a suicide room that the guide took pains to assure us had never been used.

Thoroughly educated on how to skirt 17th century zoning laws, we trekked across town to Kenrokuen gardens, allegedly one of the three most beautiful gardens in Japan. I will reserve judgement until I see the other two, but the various intricately designed and maintained vistas were undoubtedly worth the trip. I should mention that when I say “maintained” you might be imagining gardeners going around watering all the flowers and pruning a few trees, but you should be imagining gardeners going around with tiny brooms sweeping up literally every leaf that falls onto the mossy garden grounds lest it spoil the view.

With the sun setting yet again, we stuffed our gobs full of local weirdness in the form of Jibuni before heading back to the hostel. 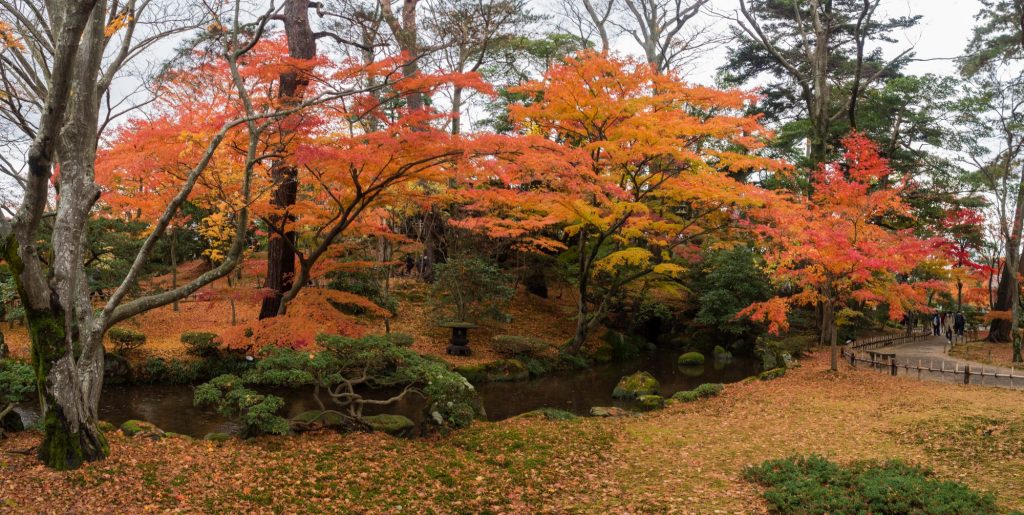